UPDATE: 24 March 2021: We should have this available end-May/beginning June and our apologies for the delay which is due to shipping issues.

PLEASE NOTE: We're not fans of plastic and avoid it where we can but to ship this, the courier insists we pack the case in a plastic bag, in case it's accidentally damaged in transit. This could affect not only other items in your order but also other parcels with the courier. We appreciate that this is not ideal and thank you for your understanding.

Our organic Coconut Milk is a velvety, smooth drink. Being 99.9% coconut is what makes it different to other milk alternatives, which are made of regular water and fillers. Use as a plant-based alternative to dairy milk. Our Coconut Milk is great to:

Please not that it's not suitable for freezing as this can cause the product to separate.

As you’d imagine, our Coconut Milk has a subtle coconut flavour with a rich, velvety, smooth texture.

Where am I From?

Like our other coconut products, our Coconut Milk is from the Philippines. The palms grow in an agroforestry environment which supports nature, and organic farming methods are observed.

Fair Trade is at the foundation of all that we do at Lucy Bee, to help make a difference to the lives of those who grow, harvest and produce our products.

The Fair Trade premiums from our Coconut Milk ensure:

Our Coconut Milk is packed in a Tetra prisma carton which is recyclable. During recycling the carton is mixed with water and shred in a large blender to separate the materials (pulp, polymers and aluminium)

The cartons are packed in recyclable card SRPs.

Tetra advise, “On average, Tetra Pak packages are made of 75% paper board and 21% polymers and 4% aluminium. Each material has its own function and purpose to protect the liquid food inside.

1. How long will coconut milk keep in a fridge?

Unopened, our Coconut Milk will keep until the Best Before Date. Once opened, store in the fridge and use within 3 days. Our Coconut Milk is best served chilled.

Our Coconut Milk has a delicious coconutty taste.

3. Can coconut milk be frozen?

Our Coconut Milk is NOT suitable for freezing.

Our manufacturer advises that if frozen the coconut water and fat content of the product may separate, with some creaming effect. This is a natural phenomenon or occurrence on this storage condition, it is still safe for consumption but it may just affect the appearance of the product.

4. Is this the same as coconut milk from a tin?

Lucy Bee Coconut Milk is 90.5% coconut water, 9.4% coconut cream, with 0.1% xanthan gum (to stop it from separating). It is more of a milk that you drink, add to smoothies, porridge, cereals and use in baking and sauces. It is still good to use in cooking and is a lighter version ie. with less fat.

The difference is that you usually wouldn’t drink a tin of coconut milk, whereas ours is intended to be enjoyed as a drink alternative, as well as cooking.

5. Is coconut milk better for you than ordinary milk?

It depends on what you are looking for in a milk. Coconut milk isn’t per say better than milk, however it is beneficial for those who may be lactose intolerant, or do not consume dairy products, for various reasons, such as vegans.

It is lower in carbohydrates and sugars in comparison to milk.

6. Is coconut milk bad for you?

Our Coconut Milk drink is not bad for you to drink. It can be consumed as part of a healthy balanced diet and is a plant-based alternative to milk.

6. What are the benefits of coconut milk?

Lucy Bee Coconut Milk drink is a source of protein with 17.78% of its energy source coming from protein:

It is a plant-based alternative to animal milks and has a better taste and texture than lots of plant-based milks, which are mainly just water and are also bulked out with fillers. Whereas Lucy Bee Coconut Milk is just coconut water (90.5%), creamed coconut (9.4%) and a smidge of xanthan gum (0.1%).

7. Is coconut milk or almond milk better for you?

It depends what you’re looking for. If you can’t have nut milks due to allergies, then this coconut milk drink is a suitable alternative as there are no nuts in it.

It’s also worth looking at what your almond milk is made up of. Is it just almonds and water, or are there other things added into it?

8. Is coconut milk a saturated fat?

Lucy Bee Coconut Milk is lower in carbohydrates than many nut-based milks, which use rice for fillers. Our Coconut Milk has a creamy texture, with no added sugars or fillers.

9. How many coconuts are in each 1 litre carton of you Coconut Milk?

Each 1 litre carton is made from approximately 3 coconuts.

10. The coconut water used in your Coconut Milk, is this from young or mature coconuts?

Harvesting coconuts prematurely is not a sustainable model - it is a waste because the white coconut meat is not developed and can’t be used.

11. Can you use Lucy Bee Coconut Milk to make yoghurt?

We have used our Coconut Milk to make yoghurt – it was runnier/thinner and needed to add more fat to get the thicker consistency that you often associate with yoghurt, so we added 2-3 tablespoons of our Creamed Coconut to it. Once made, we found that there was some liquid left on the top which was fine when using this in a smoothie but if you want to eat it as a dessert then you may need to drain off some liquid.

Sorry but this product was a huge letdown for me. Bought it at a local Supermarket. It states on the carton that it a is velvety smooth drink, it couldn’t be further from the truth... the content was a pale liquid with lots of clusters of congealed coconut milk, no matter how much it was shaken, nothing changed. I may have got a faulty batch but it put me off from buying another one. It’s such a pity because it is a fair trade (fairTSA) product. 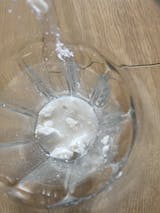 Hi Pax, we are really sorry to see that this has not been fully blended and it is not the consistency that we’d expect for our Coconut Milk. We have emailed you to discuss this further. Thank you

This is the best coconut milk I've found and I've tried them all - none of the others available are even half as good. The flavour is exceptional and it's just like drinking out of a coconut! I wish more supermarkets stocked it.

We are so pleased to hear how much you enjoy the Lucy Bee coconut milk. Thank you for sharing your feedback with us! Rian

I used to get this from Tesco and it was delicious. I look forward to ordering when you have some in stock. All other Coconut milk is revolting in comparison.

This really is the best and I use it to make bullet proof mct c8 matcha .
I've tried a few with varying results but for its lush texture and excellent flavour I can only recommend lucy bee coconut milk.
It's a product like no other.
But supply problems need to be sorted .

The best coconut milk on the market. Other brands have lots of filler and very minimal coconut content. The only problem is finding this product in the market as usually they are out of stock.

I struggled to get this during lockdown and really missed it. I love the taste of the coconut milk and I have it on cereal for breakfast. I make turmeric lattes with it too which are lovely.
My order is always processed with no problem and it arrives quickly.
If you like the taste of coconut you should give this a try. I highly recommend it.

The best coconut milk around by far!! Wouldn't have anything else now after trying this.

I hope you keep selling this and never change the formula. It is the most delicious coconut milk I've ever had and I have gone through a lot of brands. It tastes of real coconut finally! Thanks so much :)

Hands down the best Milk alternative I've tasted and I have got through ALOT. Love the ethos of this company and thankfully, the coconut milk tastes just as good.

The best product out in the market. Have been using it since the launch of it.